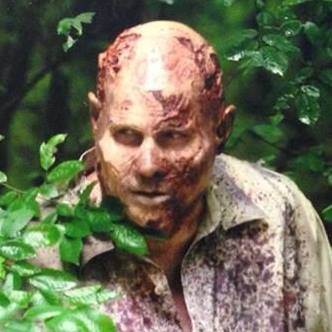 My friend Jeff Glover, Zombie extra on The Walking Dead

When I watch a TV show or movie I have a tendency to analyze all of the scientific aspects of the show for plausibility and validity. I can certainly suspend my disbelief when warranted. After all, science fiction would not be science fiction if everything adhered to the current laws of nature as we know them. There are, however, subtler aspects of many shows that intrigue me and cause me to put my pinky to my lip and go “hmmmmmmmmmmmm” Dr. Evil style.

One of those particular moments came to me while watching The Walking Dead. I’ll first start by saying I am NOT engaged in the Zombie sub-culture as much as a lot of people. I couldn’t tell you the first thing about zombie myths and legends or comic books. I became fascinated with The Walking Dead because it is filmed here in Atlanta. In fact, the CDC shown in the show is the Cobb Energy Performing Arts Centre, a venue within sight of my office window. One day during filming they had the road closed off and it was full of tanks, military equipment, and lots of freakishly gray looking people. I was hooked.

As I began watching the show I noticed something rather peculiar. The more I focused on it, the more it began to bother me. There were NO FAT ZOMBIES. I began to go over the possible storytelling reasons for this in my head. I did a little online search to see if there was something I was missing about zombies that meant none of them were fat. For the life of me I could not find a plausible explanation.

There was one guy they dragged out of a well that was a bit portly but that could have been because he was waterlogged or something. No matter, the question remains. Why are there no fat zombies?

Robert Kirkman, Executive Producer of the show, had this to say in a letter column:

There are tons of fat zombies in the comic… less so in the show, as, frankly, it’s hard to ADD to big people to make them look like zombies. Keep in mind, to make those walkers look real, you have to build stuff, on top of real people… you start adding to people my size, and well… we start to look a bit too padded, if that makes sense.

So there you have it. I spent countless hours obsessing over a stupid nuance of a TV show only to find out that the reason had nothing to do with the story or the sci-fi world and everything to do with saving makeup money. Fat people require too much makeup. And my contemplative nature sends me down another rabbit hole.